Rollercoaster ride is rewarded with points: Top-ten result for GRT at the DTM in Spa-Francorchamps

For GRT, the Spa-Francorchamps Ardennes rollercoaster once again lived up to its reputation this Saturday at the eleventh race of the DTM season. After a challenging qualifying, the Lamborghini team from Austria mastered the first heat this weekend despite a difficult starting position. Mirko Bortolotti showed an impressive comeback with his Lamborghini Huracán GT3 EVO from 20th on the grid and finished eighth. Rolf Ineichen and Alessio Deledda were classified 19th and 20th. Clemens Schmid's strong pace went unrewarded after he had to retire his car early.

The first qualifying session became a lottery due to the weather, which is typical for Spa-Francorchamps. In the practice sessions on Friday, the drivers had done their laps in dry conditions. Without any corresponding experience, the GRT quartet set out to put in flying laps at an outside temperature of 13 degrees Celsius and a wet track. Halfway through the 20-minute session, Mirko Bortolotti switched to slicks despite the adverse conditions. The brave strategy call did not pay off. He claimed a spot on the tenth row of the grid. Clemens Schmid, Rolf Ineichen and Alessio Deledda stayed on wet tyres and thus ended up on rows ten, twelve and fourteen.

The conditions had stabilised just in time for the start of the race. On a slightly damp track, the 27 GT3 cars on the DTM grid started the race over a distance of 50 minutes plus one lap. The opening laps did not make it easy for the Grasser Racing drivers to make up positions. The threat of rain made strategy a crucial element. Mirko Bortolotti was the first GRT driver to pit on lap nine. With a clear track and fresh tyres, the tactic was to gain time over the competition.

The 32-year-old Italian over a period drove the fastest lap times in the field and thus fought his way up to eleventh position. In the final stages, with drizzle setting in, he continued to push and overtook three opponents within the last four laps. After 23 laps, he crossed the finish line in eighth place. With his eighth points result of the season, the Lamborghini factory driver maintained his second place in the championship.

For the other GRT drivers, Saturday held mixed feelings. Rolf Ineichen was in 14th position at the halfway point of the race when he made contact with another car in the last corner. The 44-year-old Swiss made his pit stop immediately afterwards and moved up from 23rd to 19th in the second half of the race. Alessio Deledda, meanwhile, again showed a positive form curve on the 7.004 km long Ardennes rollercoaster. The 27-year-old Italian had driven the Lamborghini Huracán GT3 EVO for the first time at Spa-Francorchamps on Friday and used Saturday's race to gain further experience. Starting from 27th place, he saw the chequered flag in 20th.

Clemens Schmid was ahead of Mirko Bortolotti in the early stages of the race and drove a long first stint that saw him move up to fourth position. The 32-year-old Austrian and his pit wall speculated on rain, but the hoped-for change in the weather failed to materialise. During his pit stop on lap 16, a wheel nut also jammed, causing him to fall far behind. After a late second pit stop for rain tyres, it was decided to park the car early with no chance of points.

Mirko Bortolotti: "We can be happy with the result today. In qualifying, our gamble on slicks didn't work out. We just had to try something different to be up there and unfortunately this approach didn't pay off this time. On the other hand, we executed a really good race to finish in the points after starting from P20. Strategy was on point and the team did an excellent job."

Rolf Ineichen: "I backed off on the opening lap so as not to risk contact and lost places in the process. That was not optimal. I had a really fast car in the first part of the race, but there was no way of getting past the cars in front. We stayed out for a long time and I then made a mistake when I was about to enter the pitlane. I did not see Maro Engel and we collided. That was an unfortunate misunderstanding and I'm very sorry for him. We spoke after the race and I apologised to him for that. It was just a stupid situation. The pit stop was good afterwards. The crew did a great job and I just went on to finish the race."

Clemens Schmid: "After our good performance in the practice sessions, it was a sobering Saturday. We couldn't use the start to make up positions and then I got stuck in traffic. We decided to stay out anyway and speculated on rain, but unfortunately it came too late. Due to the long first stint we lost a lot of time and then we didn't have a clean pit stop. That set us back even more. In the final phase there was nothing left to lose and we tried again on rain tyres. But the rain was not strong enough and we had to stop."

Alessio Deledda: "It was a challenging day. The conditions and the track were extremely demanding. I didn't test here before, which in combination with the weather didn't make it easy for me. Especially in the first part of the race I struggled to get into my rhythm. It got better as the laps went on. I hope the conditions are stable tomorrow so I can build on that and have a better run."

Gottfried Grasser, Team Principal of GRT: "Considering the starting position, we have to be happy. In qualifying, our expectations were not met. The Lamborghini usually is a very strong package in the rain, but this time the balance was not what we had imagined. We need to look at what the problem was so that we are in a better place for these conditions on Sunday. In the race, the cars were absolutely competitive, as we had already seen in the practice sessions. Mirko fought hard for eighth place, earning more valuable points. For Rolf, Clemens and Alessio it was a difficult day, but we are optimistic that we can show more on Sunday with all four cars." 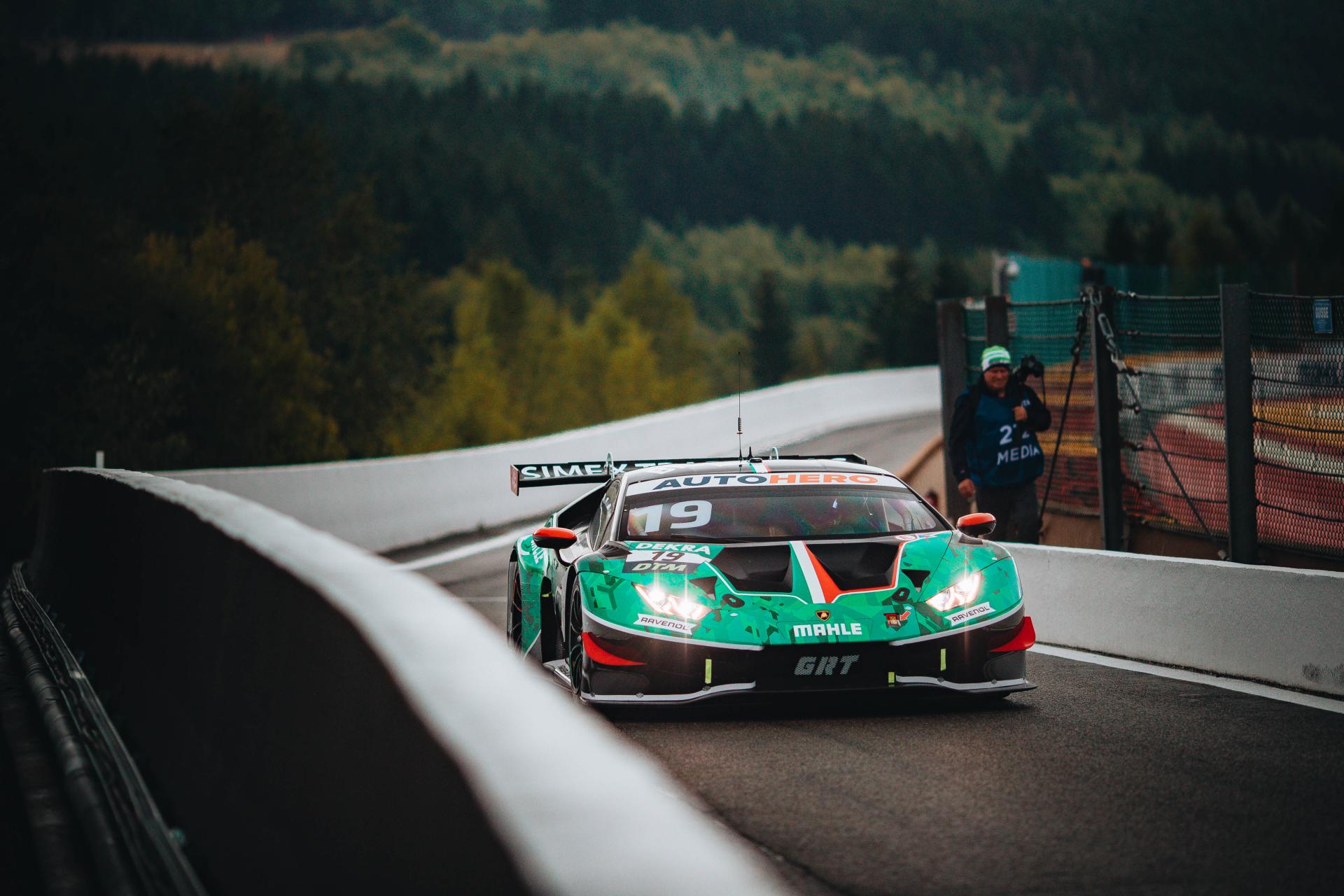 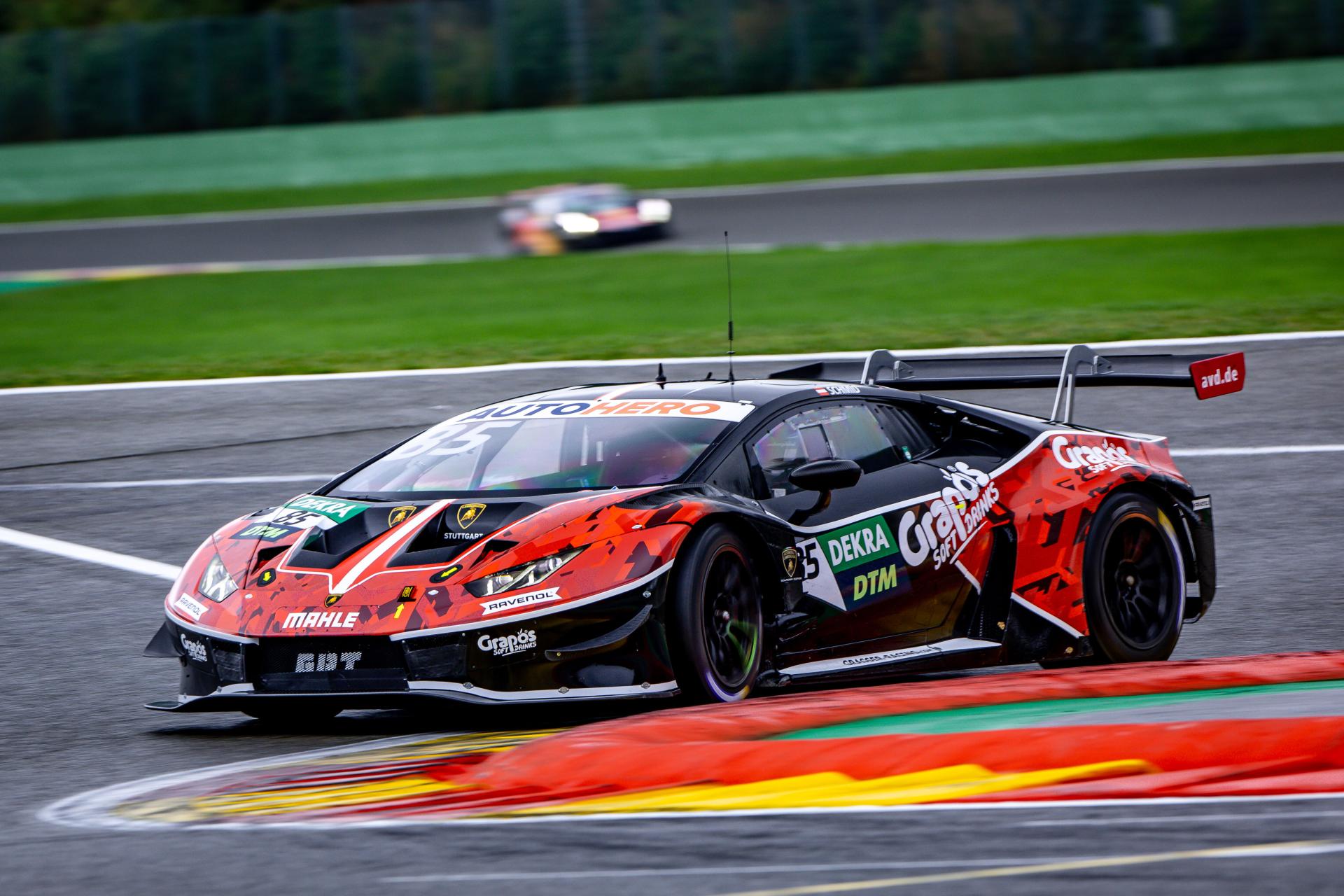 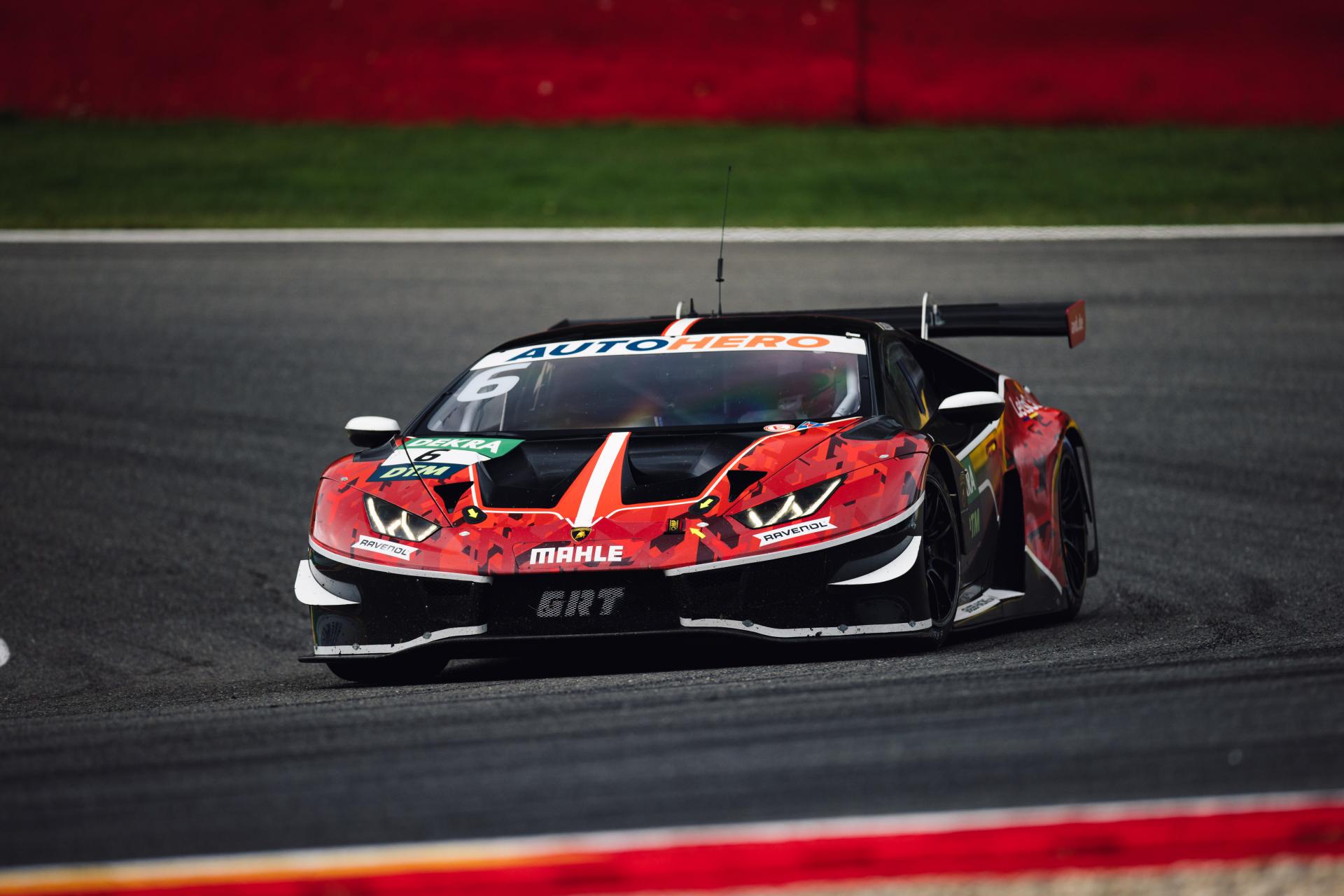 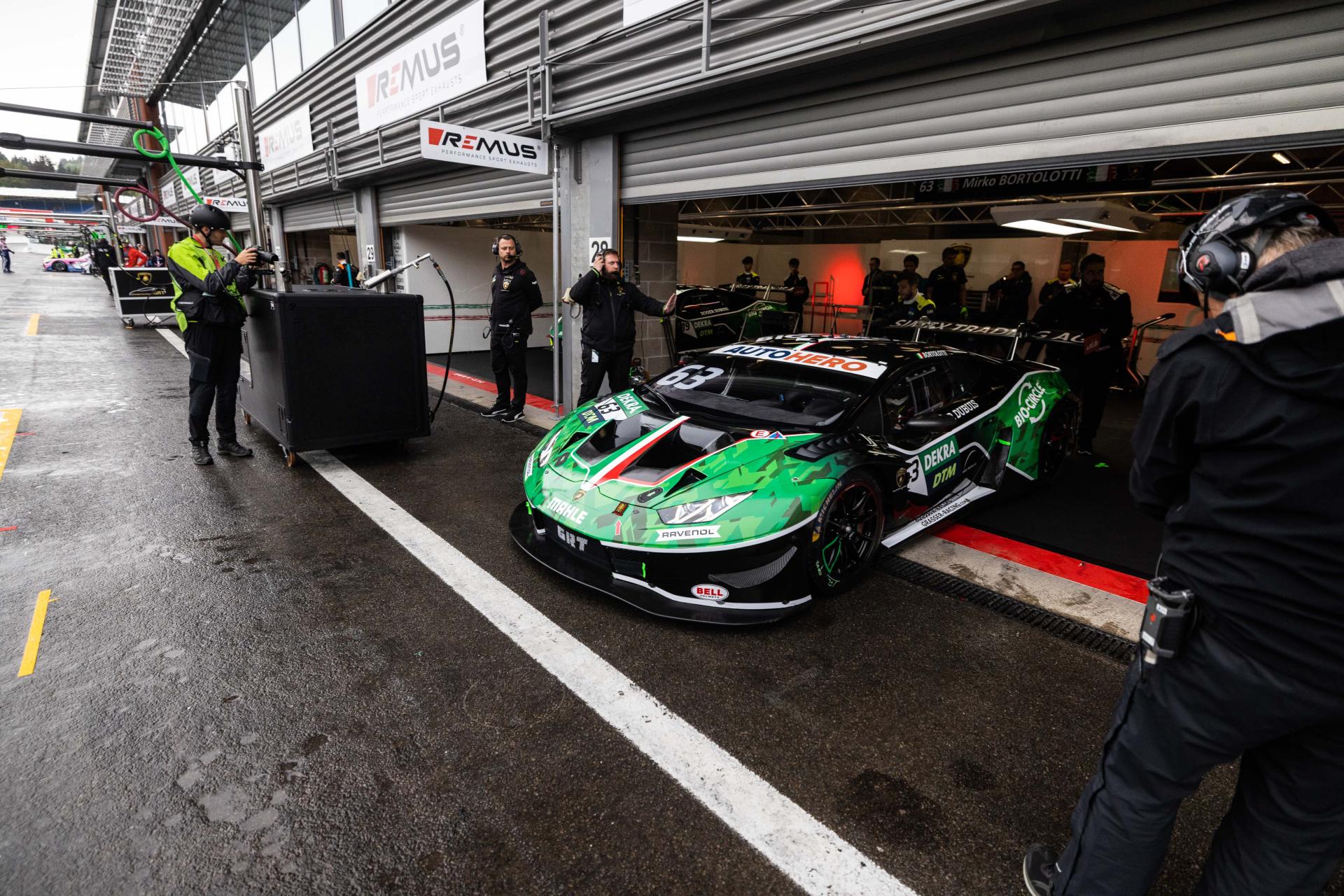 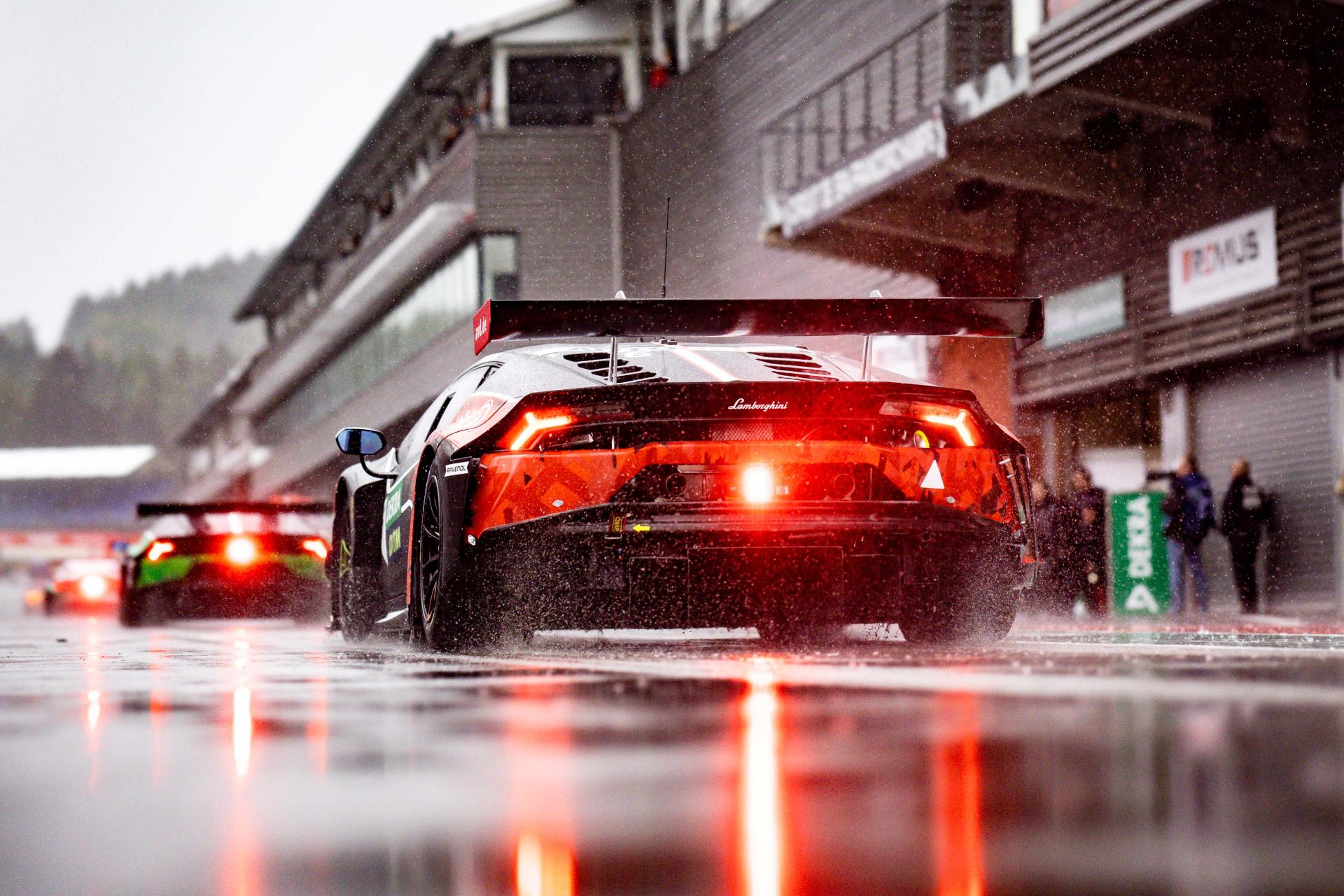