Turbulent Saturday for GRT at the fifth stop of the 2022 DTM season at the Nürburgring. The first of the two races on the iconic circuit in the Eifel region did not provide the Lamborghini team with the reward they deserved. Mirko Bortolotti set the fastest lap of the race behind the wheel of the Lamborghini Huracán GT3 EVO for the third time this season. However, the Lamborghini factory driver did not see the chequered flag after making contact while battling for the win. Clemens Schmid advanced from 19th on the grid to twelfth place and was thus the best-placed GRT driver. Rolf Ineichen and Alessio Deledda finished 18th and 20th respectively.

The race day started with the typical Eifel weather for team principal Gottfried Grasser's crew. Thick fog at an outside temperature of around 13 degrees Celsius covered the area around the 3.629 km long sprint circuit of the Nürburgring. After qualifying had to be cancelled due to the adverse conditions, the race was held almost four hours late. The starting grid for the heat over a distance of 55 minutes plus one lap was determined on the basis of the overall standings. Mirko Bortolotti started the race from pole position as championship leader. Clemens Schmid, Rolf Ineichen and Alessio Deledda were in rows 10, 13 and 14.

The start got under way on a wet track at 17:15 local time. Mirko Bortolotti initially had to bring the slicks into the working window in these tricky conditions and lost one position on the first lap. In the course of the first stint, he steadily increased the pressure on Felipe Fraga, who was in the lead. The GRT pitwall decided on the right strategy and the 32-year-old Italian briefly took over the lead from the Brazilian after the pit stop on lap 21. He again needed a few laps to get temperature into the tyres. After that, he caught up with Fraga again while setting the fastest lap. On lap 28 there was a contact which ended the race for both drivers.

Clemens Schmid as well showed a strong pace in the Lamborghini Huracán GT3 EVO on Saturday. The 32-year-old Austrian had already made his mark on Friday with third place in the first practice session and continued his strong performance in the race. In the hectic early stages of the race he dropped back to 22nd place, but with a long first stint and the sixth fastest race lap he fought his way back to twelfth position. After his ten-position recovery, he just missed out on the points.

Rolf Ineichen had to take a break due to illness at the Norisring in July and returned to the cockpit of his #19 Lamborghini Huracán GT3 EVO at the Nürburgring. After two 13th places in the practice sessions, the cancellation of the qualifying robbed the 44-year-old Swiss of a chance to earn a better starting position for the race. In the race, things went his way though. Within the first five laps he made up six places and eventually saw the chequered flag in 18th position.

In the #6 Lamborghini Huracán GT3 EVO, Alessio Deledda recorded another personal achievement at the Nürburgring. The 27-year-old GT3 rookie had again made progress in the practice sessions and did not let the adverse conditions throw him off track on Saturday. Starting from 27th on the grid, he mastered the tricky early stages and got on better and better as the race progressed. In the classification of the fastest race laps, he finished in 15th place among the 28 participants.

Mirko Bortolotti: "I made a mistake in the last corner when I tried to overtake Felipe. It was still a bit wet on the inside and I couldn't hold the line. The outcome of the race is very disappointing for me. I am really sorry for my team and for Felipe for what happened. It was a bad day and there is nothing more to say about it."

Rolf Ineichen: "It's always difficult to start the race from so far back. I still had a good start and we then decided to got for an early pit stop to get out of traffic. Unfortunately, the timing was a bit too early. The track wasn't dry enough yet and we lost a few positions. I found myself behind Maro Engel as a result, but didn't get into a position to attack him. The car was very good and I'm sure we could have done more. On Sunday we want to maximise the potential."

Clemens Schmid: "For us, it was a big disadvantage that there was no qualifying. We had good pace in the practice sessions and could have certainly achieved a better starting position on our own. The first lap of the race did not go well for me. At the start, a competitor caused some chaos with an over-ambitious move that cost me a few positions. I got pushed off several times after that and often found myself on the wet line due to the battles, which meant no temperatures and no pressure got into the tyres. Later on, we were fast in clean air and the pace would certainly have been enough for points, which is why we can't be satisfied with twelfth place. The car was really great. Thanks to the whole team for the fantastic work."

Alessio Deledda: "The conditions were extremely difficult. It was the first race for me at the Nürburgring and I definitely missed qualifying in order to prepare for it. In the early stages, it was not easy for me to find my rhythm with the slicks on the wet track. I dropped back a little bit, but got going better and better as the track dried. My confidence grew and my lap times got faster. I am very happy with my personal fastest lap and the race pace towards the end. I am looking forward to the second race."

Gottfried Grasser, Team Principal of GRT: "It was a difficult day on which we should have achieved much more. Mirko saw a gap when he fought for the win and tried it in a spot where it was in parts still wet, which led to the collision. This was certainly the outcome he least wanted, but unfortunately it happened. Apart from that, the team did an excellent job again. All our cars were fast. Clemens came back very strong and Alessio made great progress again. His lap times were right up there with the midfield. Rolf, on the other hand, was a bit unlucky with the timing of the pit stop. In terms of results, it was definitely not our day. But the most important thing in a situation like this is to look ahead and focus on your strengths. We still have seven races in which we can do better." 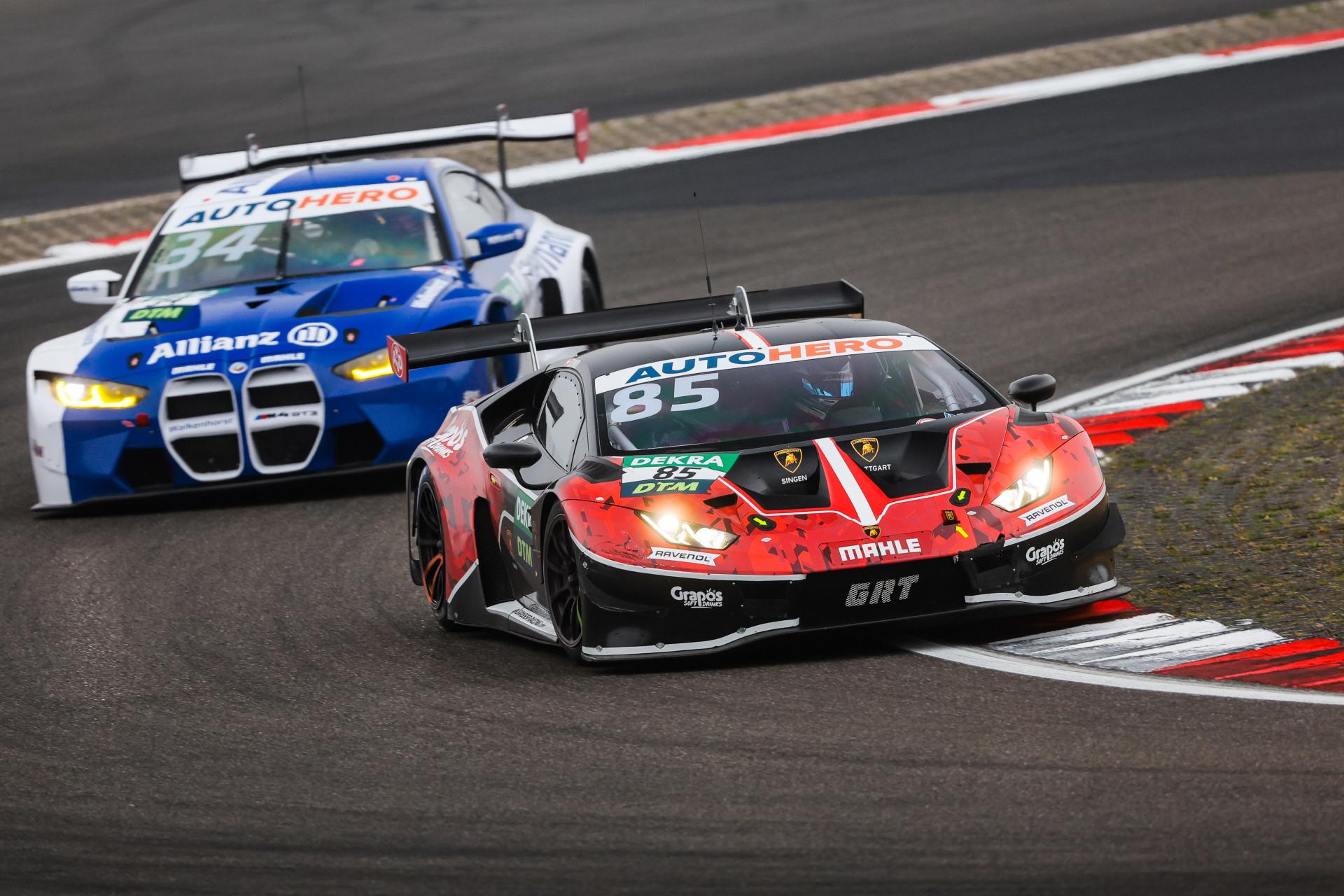 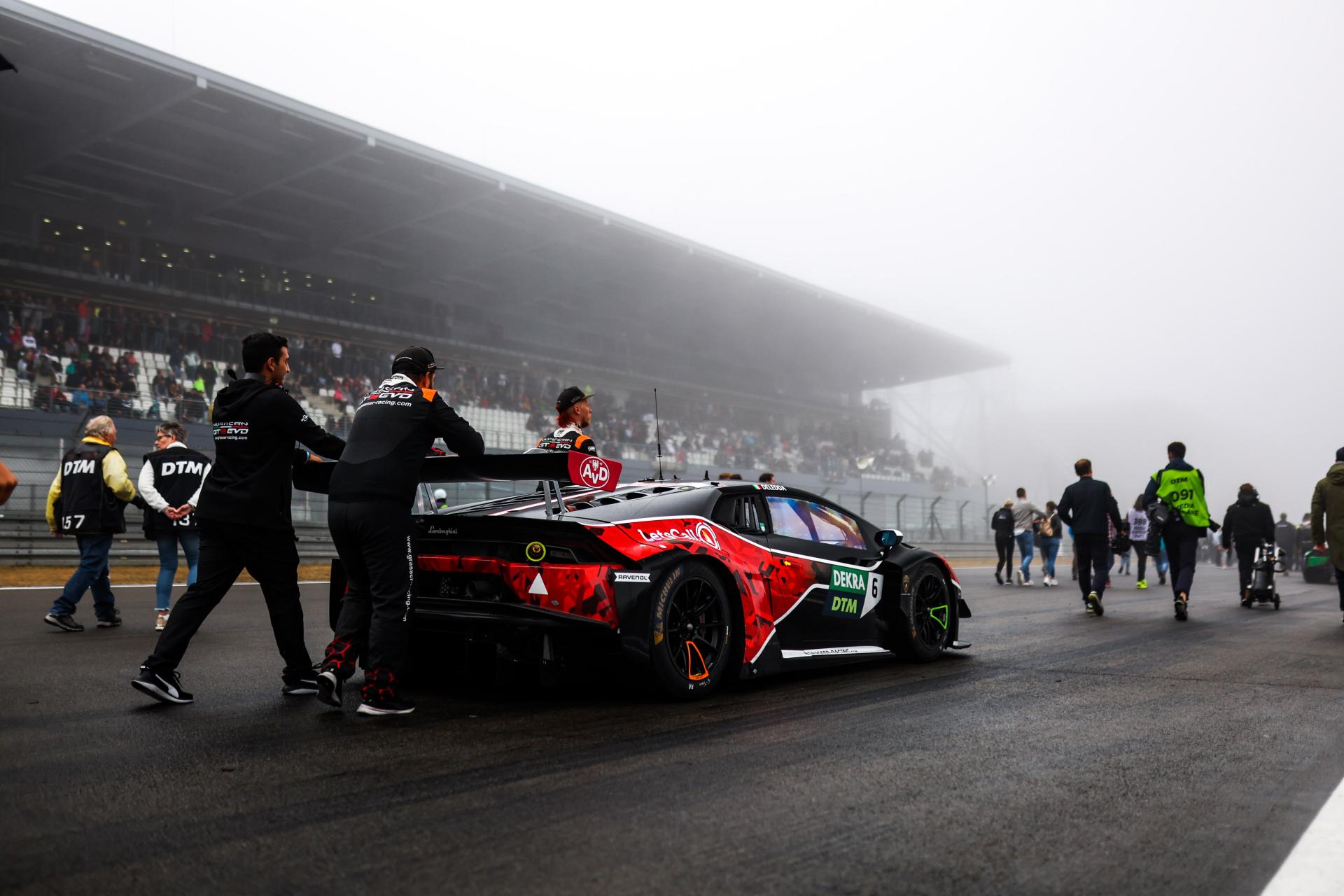 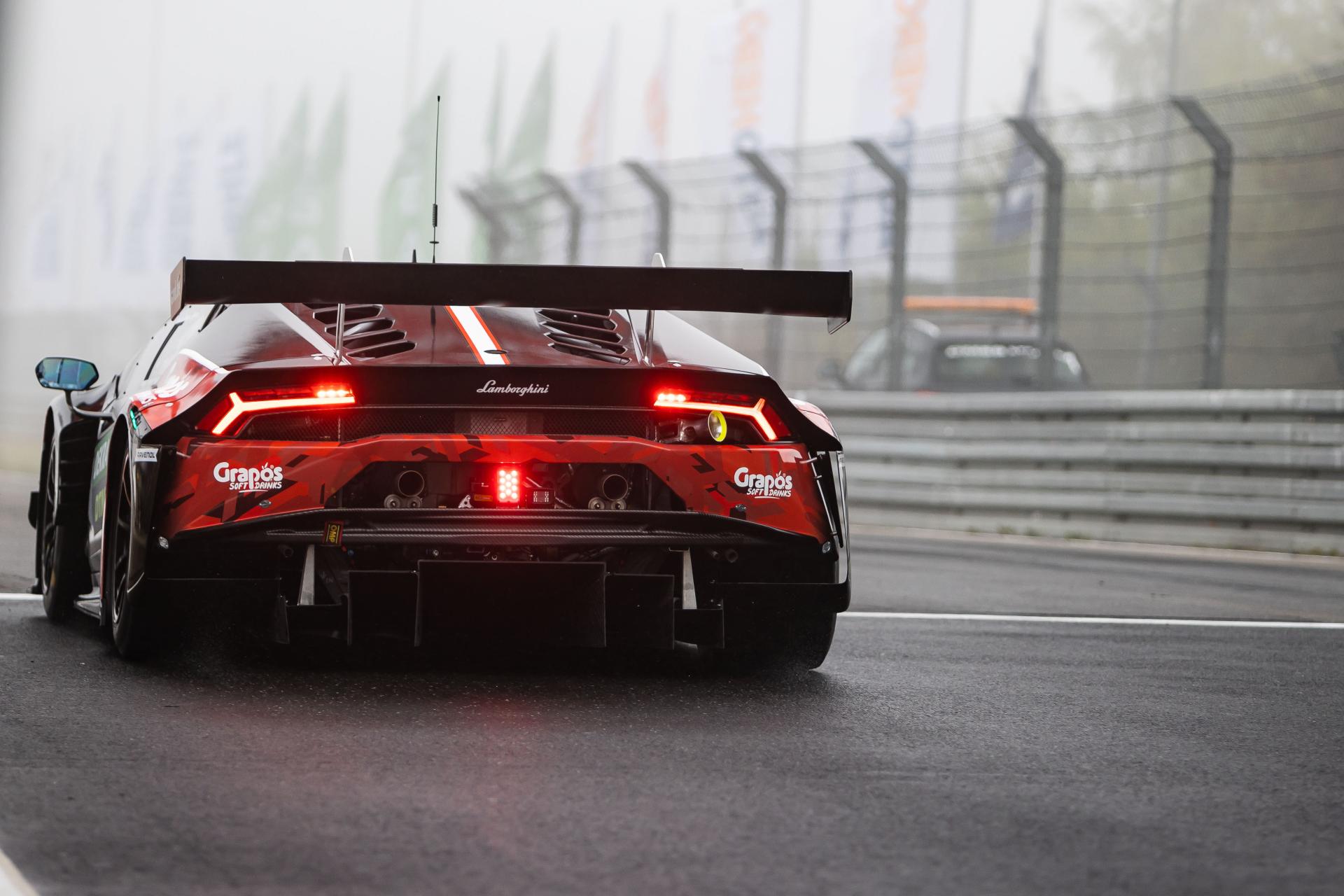 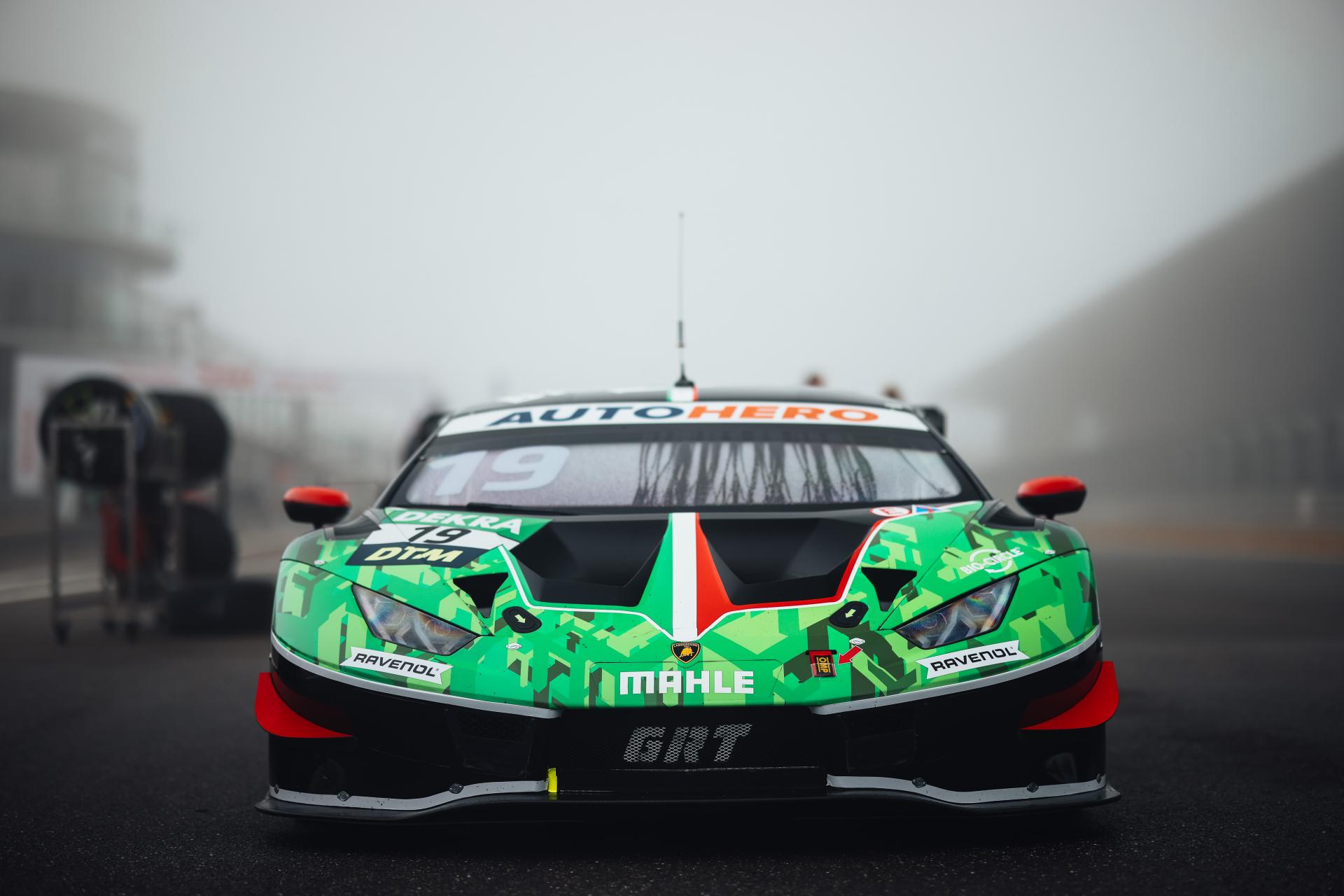